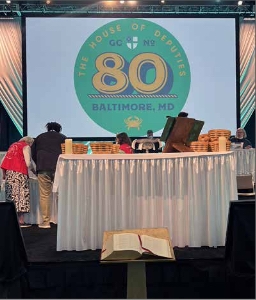 National Altar Guild Association (NAGA) members traditionally serve at the General Convention of the Episcopal Church to help prepare and set up the Eucharist, as enlisted by Convention staff. With Covid-19 restrictions and frequent changes in convention planning, NAGA plans to assist with Eucharist were in constant flux. When General Convention was shortened in length and limited to only deputations and essential staff, no large Eucharist services were initially planned.

However a few weeks before the beginning of General Convention, NAGA was asked to help with "smaller," separate Eucharist services for the House of Bishops and House of Deputies. A group from Province III's Altar Guild ministry, led by Sharon Nachman, sprang into action to obtain items needed for the Eucharist stations--chalices, linens, bread baskets, etc.--to ensure everything was available and set up. All of the linens, chalices and patens were borrowed from local churches (and later returned to their rightful places). Whole wheat as well as gluten-free wafers were distributed. As was typical for the 80th General Convention, there were last-minute changes and adjustments for both services, and only three altar guild members per service: one in the House of Bishops and two in the House of Deputies. Still everything went well with each service, thanks to the work of our provincial Altar Guild members!

--adapted from an article in the National Altar Guild Association Summer 2022 Epistle, used with permission.