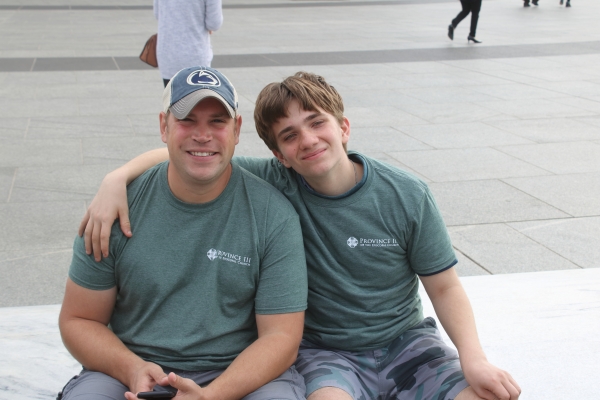 Story from the Province 3: Trail to Truth

My experience with Province III was incredible and enlightening. I met so many new people from Dioceses outside of Maryland and learned so many new things about African American history. I was completely engrossed in the two museums we visited and while I took away the answers to many questions I had, I also brought new questions and ideas home with me.

God was present in the Province III community from the get-go. We spent the first night getting to know each other before a very spiritual service in which we renewed our baptismal covenants and washed one anotherâ€™s hands. Not only did this experience bring me closer to God, but to my fellow pilgrims as well.

Returning back to school, while difficult, has also been eye-opening. I am motivated by what I learned and discussed to help relieve racial tension and bias in my own community, and I hope to do more to fight for equality in the coming years. All in all, I loved the Province III pilgrimage and took away more than I ever could have imagined.
-Ella Tomko
St. Margaret's, Annapolis

October 11-13, 2019, over 40 youth and youth leaders traveled from Washington, D.C. to Philadelphia, PA and Baltimore, MD to learn more about the history of racism and how to participate in its dismantling in our churches, the Mid-Atlantic seaboard, and our nation.

The pilgrimage began in one of the historic African-American churches in our province, Calvary, in Washington, D.C. There they heard from Maryland Bishop Eugene Sutton and the Rev. Dr. Gayle Fisher-Stewart of St. Luke's, Washington, D.C. (another historic African American Episcopal church), participated in worship, and began to get to know their fellow pilgrims.

The following morning was spent at the National African American history museum, before heading up to the African Episcopal Church of St. Thomas in Philadelphia. Founded by the Rev. Absalom Jones, Richard Allen, and others, AECST is the oldest Episcopal church (1787) founded for persons of African descent. While there, the pilgrims learned about the church's history and founders and worshipped with the congregation the following morning. Later that day, they toured central Philadelphia and learned about the founding fathers connection to slavery and the Quakers role in abolition.


The pilgrimage ended with reflection time at St. James, Monkton, just north of Baltimore, an area on the final leg of the underground railroad. Through prayer, discussion, reflection, a campfire, and a labyrinth walk, the youth were encouraged to begin processing and incorporating their experience into their lives.

A Conversation on Race